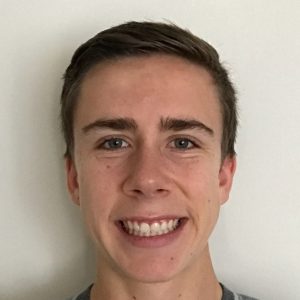 Brad Bergin recently graduated Queen’s University with a Honours Bachelor’s of Science Degree in Life Sciences with a specialization in Neuroscience. Brad has shown strong compassion for the elderly stemming from his experience volunteering with the Alzheimer’s Society. He has also revealed a great deal of interest in rehabilitation therapy rising from his long-standing participation in athletics. Psychosocial Predictors of Fear of Falling in the Elderly: Understanding the Role of Social Support, Personal Mastery and Depression was his first research project venture in which he was the lead researcher. This study ignited a passion for inquiry as he then went on to conduct a study examining somatosensory decline in individuals with diabetes for his honours thesis project. Brad wants to take this passion in rehabilitation therapy and research alongside himself as he pursues a future career in medicine. He has recently applied to Canadian medical schools in hopes of attending in the upcoming academic year.

Background: Type two diabetes is often associated with a loss in somatosensory function which can have detrimental outcomes for these patients. It can contribute to a reduction in balance, leading to falls and it can also mediate the development of pathologies such as foot ulcers. Despite this knowledge, few longitudinal studies have quantified the rate of somatosensory decline in those with type two diabetes.

Purpose: To use the validated Cumulative Somatosensory Impairment Index (CSII) to examine the rate of somatosensory decline in older persons with type two diabetes and to analyze biological markers that may mediate this decline.

Methods: InCHIANTI study participants (n=451) aged 55-85 with full CSII data were included. The sample population was divided into those with self-identified type two diabetes (n=64) and those without diabetes (n=387). Somatosensory function was measured at two time points using the CSII, three years apart. The CSII consists of four tests, the vibration sensitivity, pressure sensitivity, graphesthesia and proprioception modalities. Blood samples were collected to identify the levels of biological markers including fasting glucose, triglyceride, Tumor necrosis factor alpha (TNF-alpha) and Interleukin-6 receptor (IL-6R) levels. Demographic variables such as age, sex and BMI were adjusted for in the analysis. Co-morbidities such as neuropathy, clinical depression, stroke and peripheral artery disease were included to describe the participants.

Results: In the 2 (groups) x 2 (time) Mixed factor ANOVA it was determined that those with diabetes had significant greater somatosensory impairment than those without diabetes. Both groups declined at a statistically similar rate over the course of three years. To understand the effect size of each CSII modality, a Chi-squared analysis was performed. At baseline the graphesthesia modality had the greatest effect size (Cramer’s V= 0.167). At the follow-up the vibration sensitivity modality had the greatest effect size (Cramer’s V=0.207). The pressure sensitivity and proprioception modality were unable to differentiate individuals based on diabetes status, at baseline and the follow-up respectively. Fasting blood glucose and triglyceride levels were significantly greater in those with diabetes, however, neither biological marker contributed to the somatosensory decline that was observed.

Conclusion: Although an accelerated rate of somatosensory decline was not observed in those with diabetes, there may be differential decline in individual CSII modalities. Diabetes may result in a degradation of touch receptors more rapidly than proprioceptive or pressure receptors. The CSII allows for longitudinal clinical evaluation of lower limb somatosensory function in those with type two diabetes.

BIZI IGORRE (age-friendly project in rural area): cooperation the advantages of a small town Psychosocial Predictors of Fear of Falling in the Elderly: Understanding the Role of Social Support, Personal Mastery and Depression