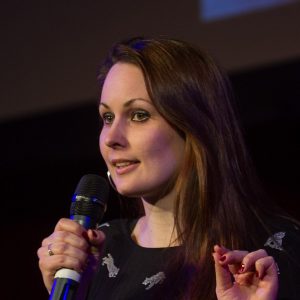 Angélique Giacomini (Philipona) is Training And Research Manager at the Francophone Network of Age-Friendly Cities and PhD student in sociology at the University of Bourgogne Franche-Comté.

She works on the adaptation of the Age-Friendly Cities approach in France and supports the territories involved in this process of adapting society to aging.

Her thesis work aims to determine the main success keys and difficulties encountered by French municipalities in the implementation of a public policy based on a participatory, transversal and anti-ageism dynamic.

Adaptation of French society to aging. Aging today in an Age-Friendly City: integration, discrimination and roles of public policies.

The Francophone Network of Age-Friendly Cities (RFVAA) was created in 2012 thanks to the motivation of five French cities to encourage the adaptation of society to aging. The fight against ageism and the feeling of belonging of the inhabitants to the territory thay live in, are the axes of reflection and action that federate the involved political and professional actors. Today, more than a hundred territories of all sizes are involved in France in this participative and integrating approach that is “Age-Friendly Cities” (VADA). The administrative organization in France required a work of adaptation of the necessary elements to work on the VADA dynamics. Moreover, a frame more in coherence with this national organization was built. In particular, the names of the themes and the methodological approach have been adapted, in order to better specify the methods of implementation of the participatory approach and the territorial diagnosis. To better understand the reasons for which municipalities enter into this approach, the way in which they implement this project, the obstacles they encounter or the resources they benefit from, a research work was initiated in 2015.

The latter is based on the study of thirteen French communes who volunteered and agreed to organize interviews with local project leaders (elected representatives, professionals and residents) and to share the working documents produced since their entry into this VADA approach. The composition of this sample is close to the one of the RFVAA: municipalities of very varied sizes, spread throughout France, various political orientations and which entered the process between the year 2012 and 2014.

The 70 lead interviews and the collected documents allowed a detailed analysis of the way in which the VADA approach had or not an impact on the public policies carried out in the commune, in particular in the fields of transversality and the consultation of the inhabitants. On this occasion, we will present the first results of this research project. Thus, we will discuss the weight of social representations on the policies carried out, the importance of the governance of the process or some levers allowing the involvement of actors working outside the medico-social field. The results of this research will allow the formalization of key factors for success according to the territories, in order to facilitate a relevant implementation of the VADA approach.

The Guelph Wellington Gatekeeper Project: A Community Driven Initiative to Build Awareness of Older Adults At Risk of Abuse Eye Health in Canada and CCB