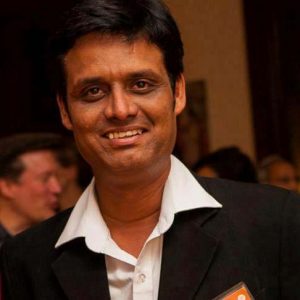 Dr. Tyagi has been working with GRAVIS since 1999. Currently, he is the Executive Director of the organization. He leads the organization through planning and management of its various programs and projects. GRAVIS is one of the leading NGOs in North-West India, and focuses on livelihood promotion, health and education. Dr. Tyagi has also contributed to a number of development and health projects locally and internationally as well as to research studies focusing on community and public health.

In 2000, he founded a major, rural hospital in Western Rajasthan and currently directs its administration. This 70-bed rural facility is an important medical center in the area.

Addressing HIV in the elderly populations in rural India

According to the estimates of the National AIDS Control (NACO) is on the lower side low prevalence. Yet because of its overall population size, India still has a large number of people living with HIV, an estimated 2.39 million. While there is not credible statistics available on the numbers of older people living with HIV, it is estimated that a sizeable proportion of people living with HIV in India is comprised of older people. The two reasons that would support this assumption are – one, India as a relatively good availability and coverage of ART increasing the life expectancy significantly, and two, there has been a significant reduction in the incidence of new HIV infections in the country. India has one of the largest populations of elderly people in the world. Particularly in rural areas, these older people live with deprivation and poverty and there is significant lack of health care services. Amidst many other challenges faced by older people in rural India, they have to go through the misery of being neglected and forgotten in HIV prevention and management efforts. GRAVIS in partnership with Help Age is running a comprehensive age-friendly healthcare programme in India, which covers several health aspects including HIV and AIDS. GRAVIS works in the Thar Desert region of India where older people live with poverty and in drought conditions. People of above 50 years of age are provided education and counselling on HIV transmission and on preventive aspects through outreach sessions with the help of locally suited training materials. Specialized training materials have been developed keeping cultural aspects in view. A cadre of about 50 community-based trainers has been developed. Those living with HIV are encouraged to access government provided ART on a regular basis. The programme has so far successfully educated over 15,000 older people in the area. The awareness on HIV has increased among elderly and there is an increased tendency of older people getting tested at government centers. ART centers are also giving special attention to older people coming for treatment due to our efforts. HIV and AIDS are a serious medial and public health challenge for elderly people too, and need adequate attention in community based health programmes. GRAVIS intends to organize a research study in future to better understand the challenges and then to replicate the programme in other parts of the country