ADVOCACY: What Works and What Doesn’t from Local to Global 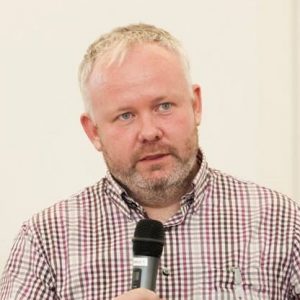 For the past 24 years, David McNally has been leading AARP’s advocacy to create positive social change on federal, state, and local issues in New York State. During this presentation he will discuss translating policy recommendations and goals to legislative accomplishments through strategic planning, grassroots activation and coordination of tactics.

The presentation will include an overview of AARP’s strategic approach to issue advocacy from an on-the-ground, in-the-field perspective using examples on national, state and local issues. The presentation will also discuss how all of AARP’s advocacy efforts contribute toward the Association’s goal of empowering Americans 50 and older to choose how they live as they age.

Whether it be healthcare reform and protecting Social Security at the federal level, stopping predatory lending or creating workplace savings options at the state level, or creating more age friendly communities at the local level, this presentation will review successful grassroots tactics using success to build grassroots capacity for future advocacy efforts, and connecting issues and people together.

Having a career in the bureaucracy and subsequently retiring to build a human rights based organizations focussed on older people, Margaret Gillis will address the issue of policy advocacy from two perspectives: as policy developer in government and as policy advocate.

The presentation will involve an overview of the impact of policy advocacy at the Federal level in Canada through the eyes of a former Executive and will then move on to discuss the work of ILC Canada to engage the Canadian Government and key stakeholders to support a Convention on the Rights of Older Persons. The presentation will outline broad approaches to policy development and then move through the work of the ILC Canada to establish itself as a legitimate voice of older people though advocacy at the UN in regard to the Sustainable Development Goals, the Open Ended Working Group and the New Urban Agenda. Actions to engage the Canadian government to support and even lead the movement to establish a Convention will be reviewed, with a focus on what has and has not worked.

Advocacy: What Works and What Doesn’t from Local to Global

There’s always a lot of talk about advocating at a local level for then it to build and inform global movements and changes – but what does that really mean to someone living in Wyalkatchem in Australia, Bora in Sweden or Pondicherry in India.

This symposium will highlight strategies that have been successful (as well as those that have been unsuccessful) in influencing policymakers at locally, nationally and regionally level. Successful strategies and actions build momentum and gravitas to inform international deliberations and negotiations on older persons’ issues, while being agents of change at the local level.

Learnings in the form of brief case studies will come from individuals as well as organisations such as Age UK, AARP, ILC and IFA on topics ranging health insurance, adult vaccinations, and age-friendly communities.

Questions to be posed to delegates include: How can NGOs be seen by government as a legitimate and informed stakeholder; How are messages from capital translated at a UN level; What are three key principles and actins underpinning successful advocacy with government; and How do NGOs measure success.

From this session delegates in the NGO field will be better equipped to draft a local advocacy strategy that has regional and global impact.

Advocacy: What Works and What Doesn’t from Local to Global

Countries like the UK, France, Japan and the United States have aged relatively slowly over the past 300 years. Clean water, vaccination and other investments in health have played a part in reducing childhood mortality and, more recently mortality in older ages. Policy change has, as a result been incremental and slow. Engaging policymakers has been a tough job when there is always a more urgent problem.