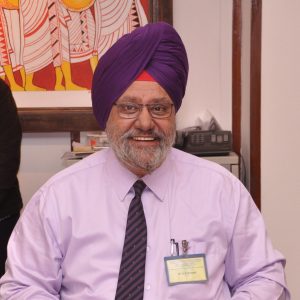 Academic Qualifications & Professional Career:
Dr. Grewal is a graduate of Maulana Azad Medical College, New-Delhi (1974).
He is a Fellow of the College of General Practioner’s of the Indian Medical Association.
He has been a Consultant Family Physician since 1978 running an independent clinic in South Delhi. He has been a pioneer in a number of innovations in family practice and has established for himself as one of the leading family physician in this part of the country.
He has been at the fore front in the academic, social and welfare activities for the profession and the community at large, he has held various important office bearer posts in the Indian Medical Association at the local branch, state and NATIONAL level (President two terms of the South Delhi local branch; Delhi State Secretary; Joint Secretary at National HQ).
He has been an active member of the resident welfare organisations holding responsible posts.
N.G.O/N.P.O Work
He is currently the CHAIRMAN of the Non-Profit Organisation Wellness Health & You (Regd). This NPO is doing pioneering work for strengthening services at primary care level, enhancing their quality scope and age-friendliness.
This is unique project not undertaken before by any other NPO in India.
To achieve this aim he has conceptulised and launched a campaign for ‘empowering’ the private primary care physicians and utilise their services to augment the National Health Programs. The campaign is the ‘MERA SWAASTH MERE HAATH MISSION’ (meaning my health in my hands mission). The campaign incorporates all the stake holders in primary care- the patient-physician and the system (the Govt), it involves updating the physician, supporting them to carry out a community sensitizing program to encourage them to utilise their services from their clinics-BOLO MERA SWAASTH MERE HAATH-POOCHO KAISE, (meaning ‘say my health in my hands-ask me how?) The physicians participating in the campaign are part of the MERA SWAASTH PHYSICIANS NETWORK. A website by the same name has been launched is operational, meraswaasth.com.

Medical Education & Conferences
Regular continued medical education programs are organised by Dr Grewal under the banner of Wellness Health & You for the members of the network; seven National level conferences have been organised in Delhi. These conferences cover topics for imparting skill and knowledge on the newer developments and subjects especially in the non-communicable diseases and providing elder friendly services. The conference is now a brand-GPSCON; they have been attended by more than 300 doctors and have the best of faculty.
W.H.O Work
He has to his credit INTRODUCING the AGE-FRIENDLY CITY/COMMUNITY INITIATIVE of the W.H.O. in India. He presented his original work on 11-Sep-2013 at the International Conference on Age-Friendly Cities in Quebec Canada. He has been a Temporary Advisor to W.H.O-S.E.A.R.O in the field of ACTIVE AGEING & LONG TERM CARE OF THE ELDERLY and has chaired the Committee for preparing the tool for training of primary care physicians in age-friendly services.
Delhi Medical Council Membership
Delhi Medical Council is a Government Statuary Body. Dr Grewal has been an elected member of the Delhi Medical Council for a full term of 5 years (2004-09) and was the Chairman of the CME Committee of the council.

Family
Dr Grewal is married to Navneet Grewal; she is a partner in the Clinic. They have two children, the older one is a daughter, she is married and stays in Charlotte, USA, the younger child is a son, he is an Officer in the Indian Army.

The NGO “Wellness Health and You” adopted the guidelines of the WHO Global Network of Age-Friendly Cities and Communities to launch the initiative in Delhi, India.  Delhi is a vast area.  It has three corporations with independent mayors, a Cantonment Board and a central area called the New-Delhi Municipal Council with an independent administrators.  It was decided to launch the age-friendly India Initiative in one municipal ward of the South Delhi Municipal Corporation (there are a total of 102 wards) and thus create a model age-friendly ward.

The Sriniwaspuri Ward No: 89 was determined to be the age-friendly ward.  The ward has a population of ~50, 000, of which 4,500 are over the aged of 60 years.  Efforts were focused on mobilizing at least 450 (10%) of this older population in the launch project.  An elder person’s forum was convened with local community leaders, professional representatives and the police.  Community based activities called elder’s melas were held in popular easily accessible venues.  A survey amongst the elders was used to prioritise social issues affecting their health and assisted the local organisations in preparing an agenda and a road map of future working on these issues.

A unique addition of the program has been the inclusion of the younger generation.  A Shravan Fauj Ward 89 S launched with a slogan-seva saman elders ka, meaning respectfully providing service to our elders, is drawn from a mythological figure (Shravan) who looked after his parents pulling them in cart for to visit religious places.

The age-friendly India initiative launched by Wellness Health & You is an initiative to create a network of caregivers, individual and community organisations, both voluntary and professional and provide them with the appropriate knowledge and skill and empower them for elder care – the first of its kind in India.

Does physical activity improve an interaction between motor control and cognitive fundtions in the elderly? Human rights as a practice model in long-term care