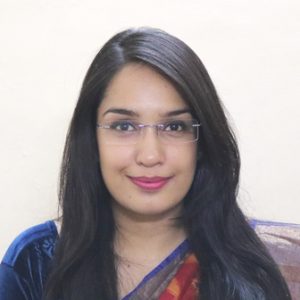 Garima Joshi is a PhD Scholar in the department of Clinical Neuropsychology at the All India Institute of Medical Sciences, pursuing her thesis in development and testing of the effectiveness of a neurocognitive remediation program for patients with Schizophrenia, suitable for a low-resource setting. She has extensive clinical and research experience in working with clinical conditions such as dementia, stroke, traumatic brain injury, multiple sclerosis, schizophrenia and other neuropsychiatric conditions that come to the out-patient department in the neurosciences centre at AIIMS, New Delhi.

Association of Activities of Daily Living Questionnaire with Neurocognitive Functioning and Depression in Alzheimer’s Dementia ?

Background: The Activities of Daily Living Questionnaire (ADLQ) assesses functional impairment in elderly population, loss of which is an important indicator and forms a fulcrum of diagnosis of Alzheimer’s dementia (AD). This study aims to demonstrate the correlation between ADLQ, PGI-Memory Scale (PGIMS) and Geriatric Depression Scale (GDS), further compared with the Clinical Dementia Rating (CDR) of the patients.

Method: 198 individuals coming to the out-patient department (OPD) of Clinical Neuropsychology Memory Clinic were recruited. Patients were screened and assessed in detail on neurocognitive tests, assessed for decline in mood, neuropsychiatric symptoms and functional impairments. Patients with varying levels of severity of Alzheimer’s dementia were included and their records were further analysed. Pearson correlation was calculated between the three scales. Linear regression models were formulated to determine the predictive value of ADLQ in relation with PGIMS, GDS and CDR.

Result: Statistically significant differences in performance were found between the elderly with different levels of severity of dementia, which correlated significantly with ADLQ, PGIMS, and GDS scores for patients, irrespective of the CDR rating. The ADLQ presented significant correlation with the total sample along with the sample of varying severity of AD.

Conclusion: The severity of functional impairment is determined by the cognitive decline, which further leads to behavioural sequelae in the form of decline in mood, apathy and flattening of affect. Since, questionnaires such as ADLQ are easy to administer and observe, and have a good predictive value for cognitive decline and comorbid depression in AD; the possibility of use of these scales at community level and general OPD level can be explored for prediction and monitoring of cases of memory decline in elderly population

Older people and online worlds: Isolation or Integration? How to achieve quality with in an environment of increasing customer expectations