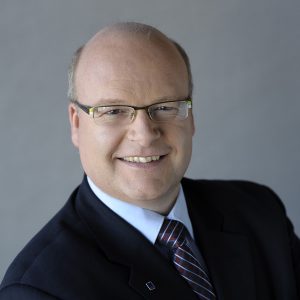 Graduated in Business Administration from the Royal Military College of Canada and completed a Certificate in Fundraising Management from the Fundraising School at Indiana University. Acted as President of Association of Fundraising Professionals (AFP) Quebec, Member of AFP Canada Foundation, Member of the AFP Committee on publications, Member of Peer Review Committees for funding projects in Health and Social Services, Member of Consulting Committees on Public and Private Pension Funds and Ageing Workforce and Active Living for Senior. Gave conferences on Ageing Challenges and Solutions, Strategic Planning and Corporate relations. Worked as Manager and Executive Director for various Foundations. Was appointed Executive Director of FADOQ Network (Federation for Ageing in Dignity and Overall Quality) in November 2008.

In 2000, given the unprecedented growth of the aging population in Québec and the rapid pace of technological development, the Réseau FADOQ launched a new initiative, the Ateliers FADOQ.ca, to improve and promote digital literacy among the elderly.

At the start of the new millennium, the digital divide was expected to decrease in the years to come as technology became more affordable and devices easier to use. Almost two decades later, seniors are more digitally connected than ever. A growing number of older adults are comfortable using technology. Internet usage is increasing among the older age groups. Still, many seniors find themselves on the wrong side of the digital divide, unable to use effectively digital devices such as tablets, laptops and desktop computers.

Much of the recent interest in technology and ageing focuses on medical and assistive health technologies. New devices are helping older adults age in place while monitoring their safety. However, the relationship between technology and ageing also brings up the question of digital literacy among the elderly—and what can be done to overcome the digital divide.

Canada’s Action Plan on Open Government 2014-16 is made up of 12 commitments. Commitment 10 emphasises the importance of digital literacy. The Government of Canada will “support the development of tools, training resources, and other initiatives to help Canadians acquire the essential skills needed to access, understand, and use digital information and new technologies”.

First and foremost, when it comes to digital literacy and the elderly, the notion that seniors are resistant to new technologies must be challenged head on.

The Ateliers FADOQ.ca (literal translation “FADOQ.ca Workshops”) have grown in popularity over the years, demonstrating that age is no barrier to learning. The workshops allow volunteers aged 50 and over to put their IT knowledge to use by teaching other seniors the basics of technology. The Réseau FADOQ offers a series of workshops each focusing on a topic: tablet, computer, digital photography, social networking, general Internet browsing, Microsoft Office Excel, Microsoft Office Word.

The Réseau FADOQ strongly believes that technology can play an important role in enhancing the quality of life and the independence of senior citizens, one click at a time.

maindoeuvre50plus.com : for job seekers 50 and over The Innovative Long Term Care: DINSOW Robot Serves in Japan and EU