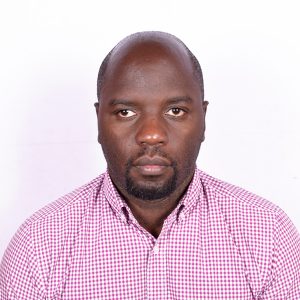 Jeffrey has been working at Ishtar-MSM, a community-based organization that advances the sexual health rights of men who have sex with men to reduce stigma and discrimination they face by advocating for their rights to access health care, including STI/HIV and AIDS-related care and treatment. Ishtar-MSM is a member group of The Gay & Lesbian Coalition of Kenya (GALCK). As Program Manager, Jeffrey has taken part in various activities on advocacy, policy and strategy formulation, and analysis. He is experienced in evidence-based HIV and sexual health programming and has sat on a variety of technical working groups at the national level. He has a keen interest in community research and is a Co-Chair of the G10 a research agency at the Gay and Lesbian Coalition of Kenya. He is also a board member of Initiative of Equality and No Discrimination (INEND) based in Mombasa, an organization that aims to engage people and institutions known to be perpetrators of violence against gender and sexual minorities.

LGBTI movements are promoting reforms to repeal restrictions on sexual orientation and gender identity that have persisted since the colonial era.  Despite all these victories by the LGBTI community, social inclusion has yet to be realized.  Stigma, discrimination and violence still stubbornly persist, and the dominant cultural and religious traditions range from indifferent to antagonistic.  While individuals may learn to be more accepting; social, religious and cultural values are too deeply ingrained and increase more especially for older LGBT Persons

Shifting norms and beliefs, especially around gender identity and sexuality orientation, are among the greatest challenges faced by the LGBTI community.  Unfortunately, research on societal change has been fairly limited, with many remaining questions that would help to further refine societal theorization.  Current research relating to what works to change society is primarily related to health and gender.  Many of these studies focus on projects that are explicitly on approaches and they are implemented in LGBT communities.  More is needed to understand what is effective in different sectors and contexts – this includes research on change relating to sexual orientation and gender identity and expression and how it affects older LGBT persons. [in Kenyan context].

Society matters because they influence behavior.  Since some attitudes perpetuate harmful practices and reinforce gender and other inequities, a solid understanding of existing beliefs in a specific community, who maintains (or is perceived to maintain) these beliefs, and how they relate to behaviors, is critical in programming (i.e. program/intervention design, effective execution, and improved monitoring and evaluation efforts).

Religion
Religion plays an important role in framing public discourse on sexuality, especially in countries where religion fully permeates social life.  Studies have shown that religion constitutes an inextricable part of African society.  In fact, some scholars describe Africans as “notoriously religious”.  Being the main fabric of the society, it permeates all aspects of life and overlaps with socio-cultural-political and economic spheres of life and development.

By and large, the role of religion in African dynamics around LGBTI people’s rights remains a significant yet complex issue.  Therefore, perspectives of religious beliefs on sexual and gender diversity, i.e., religious norms that are opposed to homosexuality all with diverse effects to older LGBT persons

Culture
Kenya is a multi-ethnic and multi-racial country; the multi-ethnic nature means that Kenya has literally as many cultures as it has ethnic groups.  Kenya’s culture reflects cultural diversity with over 40 ethnic groups with different cultural values, culture influence and cultural identity.  While, it may be difficult to talk about a Kenyan culture and traditions, it is important to note that cultures and traditions were originally developed within tribes, even before borders of regions were created.

Cultural forces reshape social realities for LGBT folk life in Kenya.  In a recent ruling on May 24 2019 of petition 150 and 234 seeking to decriminalize same sex conduct amongst consenting adults, the high court of Kenya upheld colonial era “sodomy” laws under sections 162 (a) and (c)  ruling in favor of submissions.  Stating that homosexuality insulted traditional morality being that the sections strived to uphold cultural and moral values

There is a worrying trend of diminishing visibility of older, LGBT individuals and it is not clear where they are.  They keep away from organizing and social spaces, either due to stigma they face from younger LGBT individuals or because they do not feel like they fit in.

It is vital to have programs that integrate older LGBT and younger ones to destigmatize and demystify the fear of getting old.

NCD Risk among Nepalese elders: How prepared we are? DEFT: The design and evaluation framework for technologies to support care and wellbeing