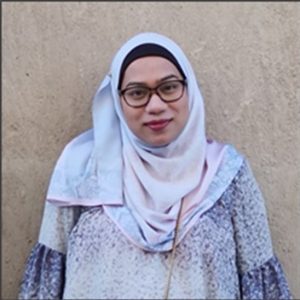 Azliyana first joined the Faculty of Health Sciences, Universiti Teknologi MARA in 2016. She graduated with a Bachelor of Science (Hons) degree and completed her Doctorate by research at the Universiti Teknologi Mara, Malaysia. She obtained her Doctoral degree in the field of Physiotherapy, major in Geriatric Rehabilitation. Her Ph.D. thesis was entitled “Exercise and behavioral program effects on exercise adherence, exercise self-efficacy and functional status in
older persons”. Azliyana also has published several scientific findings in local and international journals and had been a member of the Malaysian Physiotherapy Association (MPA). Her main research interests are in the areas of ageing and mental health. She is currently interest to look the effects of exercise and behavioral program for Dementia and other related mental health, mainly among geriatric population.

Exercise is an integral component in the maintenance of health status among older adults.  Regretfully, it is often difficult for older adults to engage in exercise when in a long-term care institution due to environmental barriers as well as a lack motivation.  An intervention is needed to change this typical sedentary behavior.

The current study aimed to determine the effects of combining exercise and cognitive training on fear of falls, balance performances, level of depression and, quality of life among community-dwelling older adults, for a period of 24-week.  Sixty-three participants (above 60 years of age) from three different villages voluntarily participated and were allocated to one of three groups: (i) Exercise and Cognitive Training (ECT, n=18), (ii)Exercise Group Only, (EGO,n=23) and a (iii) Control Group, (CG, n=22).

The exercise consisted of endurance, strength, balance, flexibility and loco-motor training for one hour per session, three times a week for a duration of six weeks.  The cognitive training was delivered after the 6-week exercise training, for 30-minute per session, twice a week for five weeks.

Fear of falls was measured by modified fall efficacy scales (mFES), balance performances were measured by timed-up and go test (TUG), while the level of depression and quality of life were measured by 15-Geriatric Depression Scales and SF-12, respectively.

In conclusion, the combination of exercise with cognitive training may be a promising intervention rather than exercise training alone in combating the fear of falls and depression, and as a consequence improving overall health-related quality of life among older adults.

The chicken and the egg: money transfer from children and older parent decision to retire

Combating ageism, social exclusion and loneliness at the grassroots in Africa, through community-driven social care initiatives, the case of Cameroon