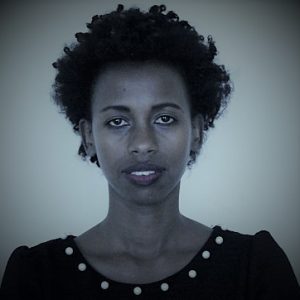 Fiona is a young elderly humanitarian. She has been in love with elderly since childhood. she was raised by her grandmother and because she grew up seeing how hard working and loving her grandmother was, she developed affection for the elderly at large.
She holds a bachelor’s degree in community psychology (Makerere University), Master’s degree in development studies (Mount Kenya University). She volunteered as a social worker at the Medical Teams International at Kibengo Health Center Nakivale refugee camp. She researched about “Human Rights and the Well-being of the Elderly in Rwanda” for the purpose of coming up with the project of helping the elderly be aware of their rights. She visits elderly side to side of the country to show them that they are still much appreciated and recognized for their hard work.
Working for Rwanda Nurses and Midwives Union, a union in place to advocate for nurses and midwives both working and retired ones, her role is to identify the vulnerable nurses and midwives who include the retired and elderly and then run the process of social and legal support. The Union helps the retired nurses and midwives to get their pension from the social security board and other retiring benefits.Fiona is starting up an elderly support project through mobilizing the children/grand children of the elderly to visit and provide for them in different aspects of life. The elderly worked for them, and the peace they have is a result of the elderly effort.

Human rights and the well being of the elderly in Rwanda

For as much as we are all equally entitled to our human rights without discrimination (UN General Assembly Paris 1948), the elderly are often not aware of this fact and sometimes do not enjoy this freedom.  Having faced genocide against Tutsi in 1994, a huge number of survivors including the elderly were left homeless, without a family, HIV positive due to rape, injured and so much more.

The Rwandan social protection sector encourages the use of Vision Ubudehe Program, an approach based on economical categorization to handpick workers for public works and infrastructure programmes.  This in turn creates employment across all populations.  However older people are often unable to undertake heavy labour jobs.  Furthermore, the benefits of public works are enjoyed by large households as poverty alleviation measures (The republic of Rwanda, 2015) so older people can be deemed as non-contributors.

Protection of human rights efforts by the National Human Rights Commission saw the initiation of poverty eradication efforts by the Ministry of Local Government through social protection policy in 2005 which entailed the participatory analysis of contextualizing poverty.  This move saw the categorization of vulnerability degrees for certain groups including genocide survivors, elderly, orphans, people living with HIV and AIDS, widows, people with disabilities, refugees, victims of wars and natural catastrophes, and victims that were marginalized by the social, economic and cultural history of the country among other groups (NISR,2012).

Some elderly people in Rwanda are still facing many problems of wellbeing including poor conditions of living, discrimination, lack of special needs like the same age group for social and leisure activities, elderly special health facilities and they are also not aware of the rights entitled to them.

This presentation will describe a study to analyze the efforts of the government in protecting the elderly rights, and the awareness of the elderly on their rights and then make recommendations for positive change.

The chicken and the egg: money transfer from children and older parent decision to retire Health-seeking behaviour related to selected dimensions of wellness in community-dwelling older adults