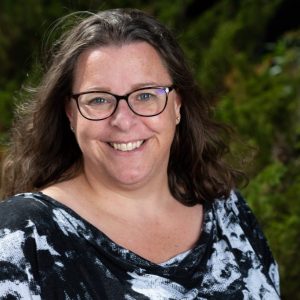 Pamela Hopwood B.A.; (she/her)
Ms. Hopwood is a Master’s of Science student at the University of Waterloo in the School of Public Health and Health systems. Her research interests include older workers, gendered employment, precarious work, systems organisation, and work conditions.
Pamela works under the supervision of Dr. Ellen MacEachen, the Primary Investigator for the Return to Work Coordinator study which led to this paper, and an expert researcher in work disability policy.
Pamela’s previous work experience in community support services, informs her own research with female, community-sector Personal Support Workers aged 55+. Work conditions of these precarious workers converge with the ageing workforce within the broader context of an ageing population and increasing demand for in-home care providers.

Given the potential for multiple parties to influence disability claims, return-to-work (RTW) processes and outcomes, how RTW professionals perceive older workers affects the viability of the ageing workforce. The goal of this paper is to discuss underlying age-based beliefs that influence consideration of older workers in RTW processes. RTW Coordinators are individuals employed to plan and facilitate the RTW of workers who are absent from work due to injury or illness.  Our qualitative study, conducted 2017-2019, included in-depth, semi-structured interviews with RTW professionals representing employers, workers’ compensation boards, insurance providers, labour unions, and other disability management organisations from across Canada. Seventeen RTW Coordinators discussed case management and claims for older workers. Interviewees noted trends towards more claims from older workers, frequent co-morbid conditions, and longer recovery times compared with younger workers.

Chronological age and quality of health influenced coordinators’ perspectives of when they felt workers “should” retire, and this shaped the support RTW coordinators provided to workers. Older workers were seen as compliant with the process, at times resistant to treatment interventions, and “set in their ways”; thus, ageism could have both positive and negative repercussions for workers. Many RTW coordinators felt they knew what was best for workers, evident in comments such as “you should be retired”. Some coordinators felt workers were putting in time or trying to get by until retirement, despite ill health. Loyalty appeared as a double-edged sword: length of service was thought to improve workers’ dedication to employers, but on the other hand, they might also feel compensation was ‘owed to them’ based on their length of work.  RTW coordinators in our study also observed that older workers may have fewer opportunities to access alternative jobs and re-training when accommodations were not possible.

Discussion Points
Discussion will explore how professionals involved in RTW view older workers, and implications of ageism for older workers returning to work.  Many players are involved in RTW, and the beliefs and practises of these parties can facilitate or impede successful return to work [1]. How RTW coordinators’ perceptions may impact ageing individuals will be discussed in the context of an ageing workforce. Costs associated with workers’ compensation continue to rise despite decades-long efforts by employers, insurers, and other stakeholders to reduce workplace disability and efficiently return more ill, injured and disabled workers to the labour force [2].

Older workers are prone to more serious injuries, while healthy or resilient older workers are also more likely to remain working, potentially masking disability prevalence via the “healthy worker effect” [3].  The role of ageism in shaping RTW coordinators’ treatment of ill or injured workers is seldom considered in scientific literature.

Conclusion / Take Home Messages
RTW coordinators’ perspectives should be explored to ensure the rights and interests of older workers are protected. Factors influencing workers’ compensation and disability claims for older workers need to be further studied to help inform professionals involved in RTW processes and mitigate ageism. Policy and procedures to guard against systemic ageism that may affect claim adjudication, or limit opportunity for accommodations or re-training, should also be considered. This is particularly poignant in light of population demographics and political and economic motivation for increasing workforce participation of older workers.