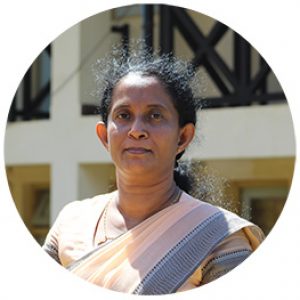 Shyama Ranabahu is a Senior Lecturer attached to the Department of Geography, Faculty of Humanities and Social Sciences, University of Ruhuna, Sri Lanka. She holds the BA Honours degree and MPhil degree in Geography from the University of Colombo, Sri Lanka and awaiting results for her PhD. She teaches undergraduate courses in Population Geography, Medical Geography, Globalization and Natural Resources Management. Her ongoing research is mainly on Population Ageing, Fertility, Reproductive Health, and Migration. She takes an active interest in the areas of active ageing, aged care, elderly security and elderly rights. She is serving as a resource person in discussions with the members of village level elderly committees to empower them to cope up with ageing and related issues.

Implications of active ageing among female elders of Sri Lanka

Implications of active ageing among female elders of Sri Lanka Population ageing remains a long-term challenge for Sri Lanka since the country has been experiencing an unprecedented growth of elderly population during past two decades. The country’s share of the elderly population was 12.4 percent in 2012 which is projected to be increased up to 24.8 percent by 2041. Since women live longer than men, women constitute the majority of older persons in Sri Lanka. The sex ratio of the young elderly was 83.1 whilst it was 67.6 among the segment of old elderly. The country, with this female favoured trend, needs to be concerned how elderly women be empowered, to be active and independent within their community. This study, therefore, attempted to examine the nature of active ageing among community-dwelling elderly women in Sri Lanka. Active ageing is defined by the WHO (2002) as “the process of optimizing opportunities for health, participation, and security in order to enhance the quality of life as people age”. The study focused on to explore comparatively, the gender-based disparities of opportunities and barriers related to two domains of active ageing; participation and security. The results were based on data gathered through a survey of 350 community-dwelling elderly men and women in three geographical settings representing urban, rural and estate sectors. The study was guided by the pragmatic paradigm and used mixed-methods design with a deductive theoretical drive. Findings were derived from both quantitative and qualitative analysis using bivariate and thematic analytical methods. The respondents comprised of 57.4 percent of females and 42.6 percent of males with a mean age of 70.5. Findings revealed a male dominant participation pattern in the workforce after the age 60. It was noted that female elders, compared to men were more vulnerable in terms of income security. The data indicated that 72.3 percent of female elders were without any direct income compared to 27.7 percent of male elders. There was a selectivity of social participation among elderly men and women. In terms of social security, immediate family’ was the dominant source of social support for both male and female elders in Sri Lanka. The social support for women was fulfilled through ‘elder-spouse’ and ‘elder-adult child’ networks. However, the study revealed that a considerable proportion of elders, majority elderly women, were without any confidant network which is a serious drawback in terms of emotional support needed during later stages of life.

Preliminary results in the investigation of the project Promotion of Human Rights and respect for Sexual Diversity in the elderly population in Panama. Exploring Inequalities in Diabetes Care for Older South Asian People in the UK