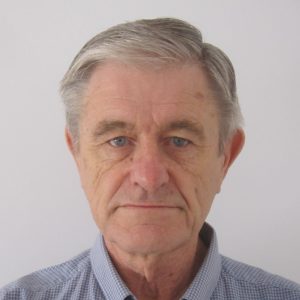 John Evernden is an Accredited Disability Access Consultant, with Degrees in Civil Engineering (1970) and Ecotourism (2005).

John worked as a Civil Engineer with Sydney City Council for 36 years and was Council’s Technical Advisor to the City of Sydney Access Committee for 17 years.

He also worked as an Access Consultant at Spinal Cord Injuries Australia and the New South Wales Independent Living Centre, and as the Community Worker Disability Services with Canterbury Council in Sydney. He now runs his own Access Consultancy, Accessible Public Domain.

Street name signs are usually found on poles, on walls, sometimes on a shop awning, and sometimes on the pavement. But, wherever they are, they cannot be found, or read, by a significant proportion of the population. When we approach an intersection controlled by traffic lights we intuitively reach for the audio-tactile button to change the lights to “Walk”, so an accessible street name sign at that location is helpful.

The signs served the City well for more than 20 years but have now been replaced with more durable aluminium signs, to the original design. Although originally developed for people with vision impairment, history has shown that the signs assist in navigation for many other sections of the community as well.

This paper details the development of the signs and outlines how their location and standardisation are providing convenience and independence for people of all ages and abilities, and how they comply with Universal Design Principles.

The easily accessible signs have shown to be useful for people who are deafblind; aged pedestrians; people of short stature or who use a wheelchair; people with cognitive impairments such as dementia; people with other sensory impairments in speech or hearing; and visitors. As Braille is an international form of reading, visitors to Sydney who read Braille can navigate the City without assistance.

In this highly technical and electronic age the simple street sign retains its importance. As the signs are always found at a standardised height and location their design could easily be adopted by any city in the world.